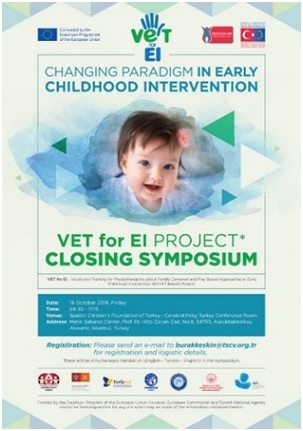 In February
2018 we informed you about the kick-off for the VET project that officially
started in December 2017 with a meeting on January 18 and 19th in
Istanbul. This is the summary and final newsletter about the entire project and
its results.

During the project we had meetings in:

–              Portugal: University of Minho and Associação de Paralisia Cerebral, both in Braga

–              United Kingdom, University of Birmingham in cooperation with Praxis Europe

On 3 meetings (Ankara, Birmingham, Braga) each partner was accompanied by 2 physiotherapists. These colleagues functioned as “critical friends” to discuss and deliver feedback on the materials made, until that moment, by the project partners. Also in each country visits to local centers to generate “real life”
impressions were organized.

As described in the EU – application, the goal of the project was:

“to strengthen the competences of physiotherapists about new approaches in early intervention system”. To ensure this can be achieved, VET for EI will generate:

— an innovative online learning platform, that will allow for an interactive learning experience anytime anywhere (PC, smartphone and tablet), multilingual, and following the Open Source approach (so “free”), provided freely to the related target group.

— the comparative report which the early childhood intervention systems of the partner countries will be compared.

Results of the project have to include:

1) Creation of a curriculum

From the first meeting the group functioned in a good working atmosphere and coherence. Coordination was well done and all members worked intensively on the outputs. Intense discussions, but with humor and a fine sense of reality, became our
“way of working”.

The final meeting lasted a week:

2 days pilot training with physiotherapists and annex professionals from all over Turkey to present and explain the materials and online modules.  We were able to bring to this meeting some of the physio’s that participated before.

This learning and training materials can be found online at:

A one day conference where results (and more) were presented and for instance the director general from the Ministry of Health and 2 mothers were present:

A final day with 2 workshops:

2)  by Ana Serrano (Portugal) and Marilyn Espe-Sherwindt (USA) for fysiotherapists: The flow and   components of ECI

During those days it became clear we have gathered a lot of important and useful information in the online module. The proces to reach this has been “a strong focus, concentration, a lot of work ánd a lot of fun during discussions, meals afterwards and during our digital contacts. It made working together contrsutive and fun.

In the disussions during the 2 day “wrapping up” we thought “out loud” and evaluated what our vision is on the result and the future. It was not a
surprise the joint vision is “this is the beginning and we need and would like to continue with further and in-depth work with these partners”.

All agreed: we have come to know and trust eachother, understand the
topics, backgrounds, cultures, wishes and experienced we could work together in a constructive way. Concrete idea’s for follow-up projects have been discussed and we will work on them together. Therefore:

see you again and succes with the modules !!